Earrings -A Fashion Statement Of The Ages 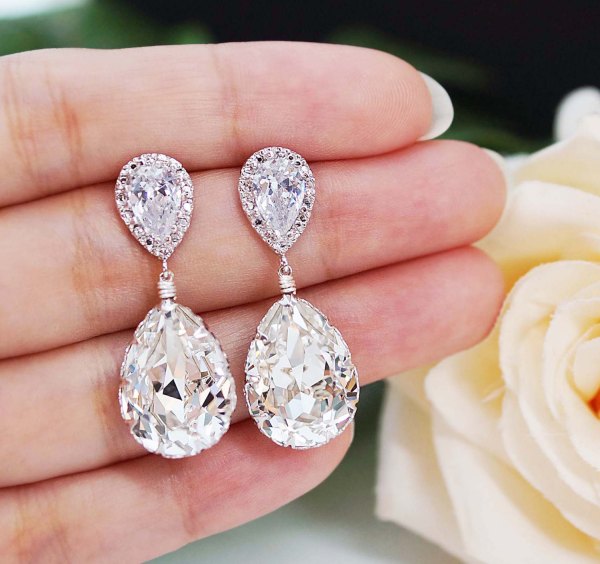 An earring is jewelry worn on the earlobe, usually clipped to the earlobe or fastened through a hole made in the earlobe. This is the piece of jewelry that is first noticed when looking at a person. This piece of jewelry decorates the ear and adds to the femininity of a woman. They are worn by both genders but to a lesser extent by man. They give the finishing touch to beauty and make a fashion statement.

History of earrings dates back to 2500 BC. In those days, earrings were worn only by the nobility. In the middle ages, this type of jewelry had taken a backseat as more importance was given to very elaborate hairstyles and neck pieces. They did make a comeback, and the metals used in the making of earrings were so heavy that the weight of the earrings caused elongated earlobes.

All precious metals such as gold, silver, platinum, and silver are used in the making of this adornment. Materials such as plastic, glass, and beads were used too. Precious gemstones like ruby, sapphire, topaz, diamond, and emerald were mounted on to the precious metal, giving the earring a more colorful, dazzling, and exotic look.

These adornments are made in all shapes and sizes to suit all types of faces. There are dangling ones, hoops, studs, buttons, droplets, chandelier earrings and many others. There are earrings to go with evening wear, for business meetings, office and more elaborate ones for weddings and other functions etc.

It would be interesting to note that in the days of Christ, it was said that wearing an earring was a demonic act. In India, in the earlier days, the Yogis practiced splitting their ears and placing large heavy earrings made of horn or glass at the time of their initiation into the sect. All that sounds crude with the advancement of technology and ear piercing is no longer such a tortuous procedure and is almost nothing more than pinprick now.

People from most cultures believe in wearing earrings at a very early age. In many cultures, ears are pierced as soon as the baby is born. This jewelry have never been the prerogative of women alone, as men wore them in years of yore and now wear them as a fashion statement. They have become a unisex piece of jewelry. Today the trend of wearing multiple earrings at the same time is prevalent.

The popularity of earrings has stood the test of time. They can enhance ones mood just my making a person feel confident and great.

Diamond is Forever and Eternity

Diamond is perceived as the most precious of all precious stones and is peerless. It is a woman’s best friend and a symbol of love. It shines and glitters and symbolizes purity and strength.

In ancient times, a diamond was considered to be a sign of magic, sanctity, healing, energy, happiness, beauty, and longevity when used, but the saying goes that a diamond is poison when consumed. It was known for its goodness and power to remove all evil. In today’s world, a diamond is regarded as a status symbol, an ornament of beauty worn by the rich and depicts a luxurious lifestyle.

A diamond is forever. You would have heard this. The reason for this saying is because it is the hardest natural material and very difficult to break. It is also a good conductor of heat and a nonconductor of electricity. It is another form of dark carbon.

Time was when diamond jewelry was only seen in royal portraits or in the beautifully designed catalogues and books. Today, sales of diamonds have taken a dramatic upward turn with branded diamond jewelry being available to millions of women. This treasured stone of romance and power has become very popular over the centuries.

A diamond is available in all shapes and colors, in fact more so than other gems. The weight measurement of a diamond is the ‘carat’. The larger the diamond, the more the carat. Big sized diamonds are a rarity and the value increases as the size gets bigger.

Diamond jewelry is the most expensive types of jewelry. Diamond pendants and rings are a craze, especially engagement rings. Diamonds are usually set in gold, white gold, silver, or platinum, the latter being more expensive. The combination of pearls and diamonds is a delight to the eyes.

There are several innovative ways that diamonds are being used, which includes imbedding them in watches too. These watches though expensive are a great gift for big occasions for loved ones when you are on the lookout for expensive gifts.

Grading of diamonds is something the one needs to know. The colors are graded from D to Z, with the lesser color being higher in value. Color D is the rarest and is colorless with a blue tinge. Since colors filter light, the reflected light is less than a colorless diamond.

For the sake of some light hearted talk on diamonds, lets delve into some superstitions that were prevalent earlier on. Diamonds that have a red or yellow hue were thought to be good for a king, because they were considered auspicious.
The white hued diamond was said to be perfect for anything religious or spiritual. The yellow hued one was said to be the one for prosperity and success. Black hue was thought to be suitable for those that are in smaller jobs. Women who wanted to give birth to sons were asked to wear a white diamond with a small black hue. It was also stressed that one should never wear a blemished diamond as it brings bad luck to the person wearing it. All these may sound like unbelievable superstitions to the nonbeliever, but these were followed quite strictly earlier. But then if you go to see, even in the modern world, in some countries, many people will not wear a diamond unless they get it checked to see if it is the right one for them.

Interesting facts aren’t they. A diamond has an indescribable aura surrounding it, and it is fascinating to learn about it.

A gift of diamonds is precious and brings a glint to the eyes of the receiver. An exquisite diamond bracelet sparkling on the wrist adds beauty even to the most beautiful woman. Diamond bracelets spell class and there is nothing better than a diamond bracelet to stand out in a crowd.

Tennis bracelets are nothing but thin line diamond bracelets, which owe their name to Chris Evert, the tennis star. During a US Open match, she was wearing an in-line thin diamond bracelet and it slipped while playing. The game had to be stopped for a while, as she searched for it. Now they are better known as tennis bracelets and are worn by other tennis players too. The charm diamond bracelets are beautiful as they hang gracefully from the wrist and are noticed by everyone around. The metals used are gold, sterling silver, platinum, rhodium, white gold, rose gold, and titanium.

When looking for a diamond bracelet, you should look for a “GIA certified diamond” sign. GIA is Gemological Institute of America and provides you the assurance that you are getting good quality diamonds. The 4C’s of diamonds are the cut, clarity, color, and carat. Carat is the size of the diamonds. If the diamond bracelet is set with bigger diamonds, the price will be higher. Asking the jeweler to provide with the certification detailing the 4C’s of the diamonds in the bracelet is essential.

It is also important to understand diamond grading. They are graded from D to Z, with D being the rarest diamond. A diamond should be colorless. Light should reflect the brilliance of the diamonds in the bracelet. Diamond bracelets that are guaranteed show no visible color and are genuine.

Diamond bracelets are a perfect gift to give someone you love. There is no need of an occasion to gift a diamond. Diamonds may be expensive but if one can afford them, there is nothing that can compare. When diamonds are arranged with other precious stones like emerald, topaz, sapphire, citrine, or ruby, they are even more colorful and beautiful.